Recently I did a few installations of a preseeded iso (for centos, "kickstarted"), but this takes longer than necessary and is just plain wrong; there's no need to re-do the same work hundreds of times at install time when all servers will end up being the exact same!

This was kicked off on an afternoon when I was flashing my Raspberry Pi, if these embedded boards can flash an image that's good enough and boot into it, even when there are some slight discrepancies in the hardware (network is using ethernet or wifi, sd cards are of different sizes, memory available changes across models, etc), why can't my servers do it? Why is no one doing this? Apart from the fact that everyone is using docker/kubernetes or something similar, which behaves similarly to what I want.

Figuring out what I need

What I want is simple: generate a "golden" disk image and "flash" it (write it to disk) without needing physical access

I started my investigation thinking of some magical API that'd be present on HP's iLO and Dell's iDRAC that would let me write bytes to disk (somehow?) but apparently this is not the case.

Next I thought about network booting something, but I couldn't find anything online that had this capability, so.. how hard is it to PXE boot a bit of code that downloads an image from the network and writes it to disk?

For PXE booting you need only two things: the kernel and the initial filesystem (initramfs).

I will not worry about the kernel at this point as I'll just copy whatever I have now in /boot/vmlinuz-$(uname -r).

Generating the initial filesystem (initramfs) is not hard, if you are aware that: * it must be in cpio format (apparently some format and utility for tape backups standardized in '88) * the kernel will execute whatever it finds in /init

First, we need to write an executable that can be kicked off by the kernel. Remember that unless we provide them, things like dns, libc, etc are not available. Compiling binaries in a static form is the best route to take.

For this example I picked a basic go example:

To build the initramfs, we have to list all the files from the point of view of / so that means we have to cd into the directory containing all of our files, and perform the magic incantation that cpio requires: ( cd initramfs/; go build init.go; find . | cpio -H newc -o > ../initramfs.raw )

Although the .go file is not required, I'll leave it there as that is my current repo.

With this initramfs cpio file, we can start a virtual machine by running kvm -kernel /boot/vmlinuz-$(uname -r) -initrd initramfs.raw 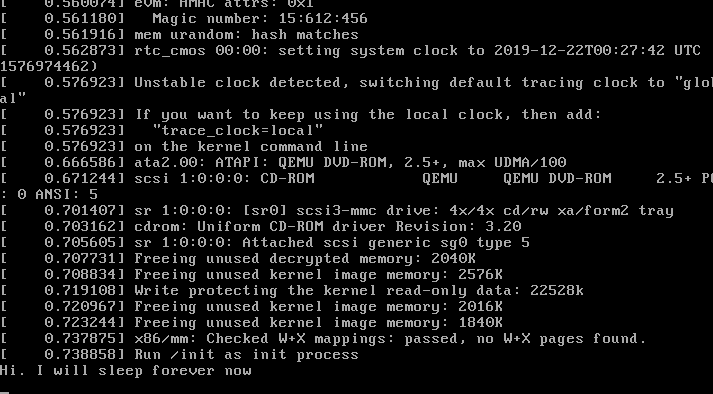 Now that we know how the mechanism works we can get a slightly more useful filesystem and for this we need busybox, as the most-appropiate way of interacting with a bare-bones file system is with unix tools instead of custom applications.

Busybox is a set of stripped-down utilities that were designed for exactly this kind of use-case: a stand-alone minimal interactive system.

First, you need to clone busybox from here and statically build it with the following script

If this is successful, it will generate a statically compiled busybox binary, that contains a lot of useful commands

The way to execute any of these commands is to give it as an argument to busybox, so to execute ls you have to execute ./busybox ls. This is useful, yet annoying as we don't want to either type all of that, or include it in our scripts. Helpfully, busybox also includes an installation parameter, which will make it symlink all of the commands that it contains to /bin.

With plenty of shell commands at our disposition, we can replace our golang init with a shell script:

It works as well!.

For the actual initramfs we want a few things:

Keep in mind that, in general, the support that we'll have in our initramfs for devices will be quite poor as we are lacking all the kernel modules that usually accompany the kernel (they live in /lib, we don't even have /lib yet!). There are two ways to add driver support in an initramfs:

I opted with copying the .ko files around for now.

For network connectivity, it starts getting a bit specific with regards of what type of NIC you'll have installed, but for now we'll continue with the e1000, the generic driver that you can use with qemu.

Once that file is present (in the same path!) in your initramfs, you should be able to run (adjusted for your network setup..)

and be pingable! without even a disk!

While having a network is a big step forward, we still need some kind of software that will allow us to download files. I did not think too much about this and went with cURL, but maybe wget or some other tool would've been easier.

As with busybox, clone curl and build it to get a static binary:

which will give you a static curl binary.

Ok, we have networking support, we have curl, now we have to manually set up the network device:

and adjust our kvm invocation to also pass in a network device: 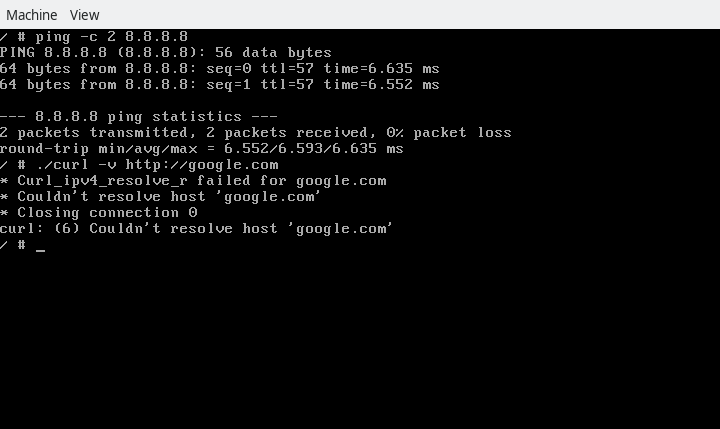 Why is DNS not working? Because it's provided by shared objects and we don't have them in our initrd!

If we had been paying attention to the build, it did warn us about it:

A great way to avoid this, is to build a DNS resolver right into curl, conveniently, curl supports ares so that means that adding --enable-ares to the configure call solves our problem: 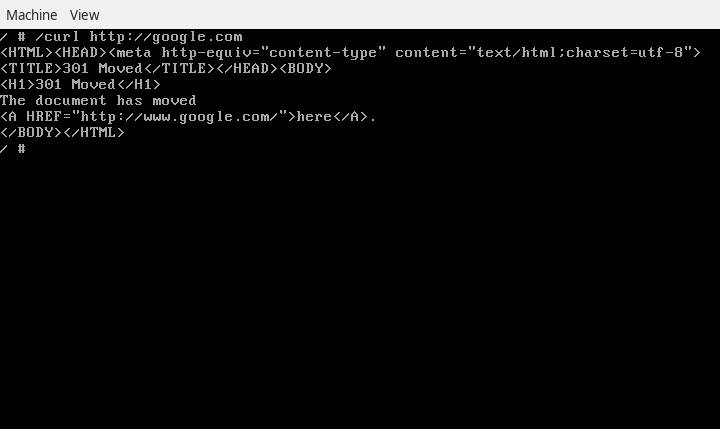 and again, we can make this happen with very few files:

Flashing a hard drive from initramfs

We are at the last step! We can now download a file from the network so let's write it to disk, we only have to add a few things to the last init:

but now, we need to pass a disk to kvm so it has a place to write to, we can do so by appending -drive file=test-disk.img,format=raw to the kvm invocation.

Creating the test-disk.img file is easy: just write a lot of zeroes to it: dd if=/dev/zero of=test-disk.img bs=1M count=1000

Keep in mind that this is an initialramfilesystem, your virtual machine must have enought ram assigned to it to keep the entire filesystem image in memory.

Now.. the image is complaining that /dev/sda does not exist, and indeed, poking at /dev/ shows that no devices were automatically created. Of course not! There's no udev in this system.. this mechanism can get triggered by running mdev (from busybox) 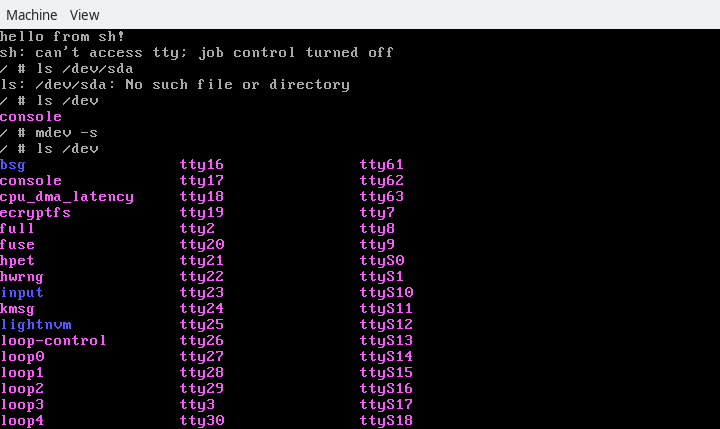 With the disk block device ready, we can run the disk flashing from initramfs 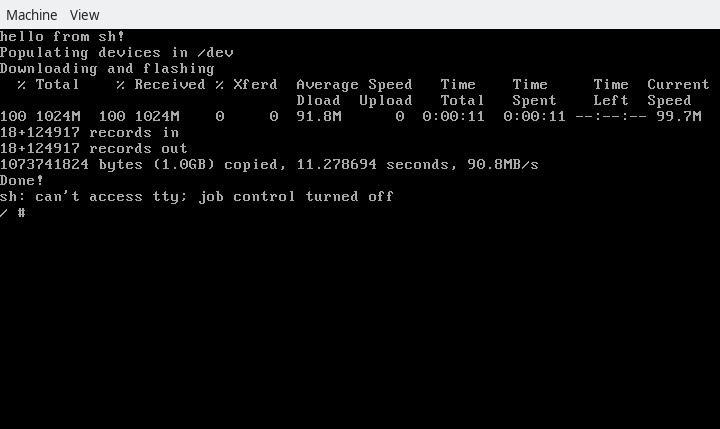 Disk is flashed. We can't just reboot -- we'll boot straight back into the initramfs, so we have to tweak our kvm invocation to not use the initrd for booting: kvm -m 2048 -cpu host -device e1000,netdev=net0,mac=DE:AD:BE:EF:88:39 -netdev tap,id=net0 -drive file=test-disk.img,format=raw 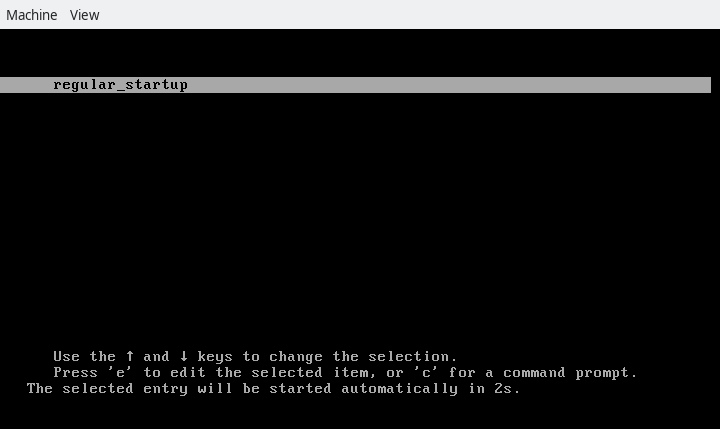 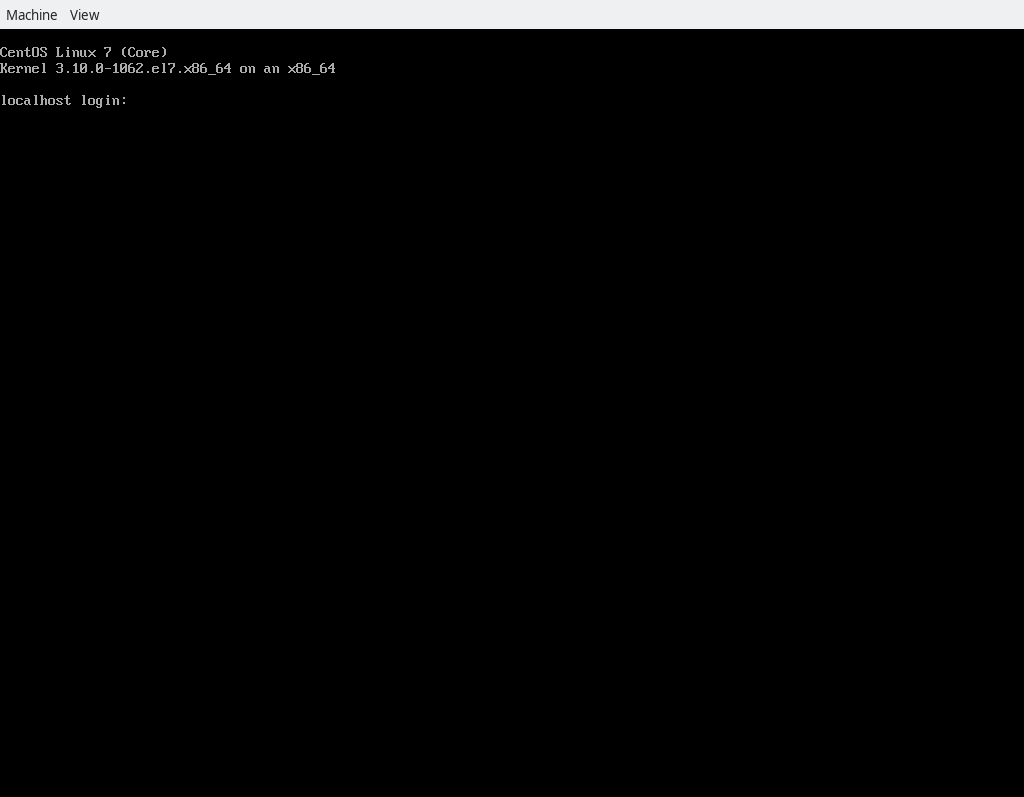 Booting into the new system without re-booting

To have this behave exactly as I want, I'd also like to remove the intermediate reboot step after flashing.. after all, the same kernel is loaded, why do we need to power cycle?

There are a few gotchas though, after flashing the disk, the kernel does not know that we have a new partition table, and we can tell it by running partprobe /dev/sda, which will print the new partition in the kernel logs (/dev/sda1).

Even though the kernel knows about /dev/sda1, there's no block device representing it in /dev, so we have to run mdev again, now /dev/sda1 exists!

We try to mount it and..

Wait.. does this kernel know about xfs? Let's check the configuration options in the original machine that 'donated' this kernel:

Aha! It's a module. Let's add this module as well and try again:

and then we add modprobe xfs to our init, but no dice:

this kernel module has dependencies! let's check on the dev machine what they are:

so, we need libcrc32c as well and we'll add it in the exact same way that we added xfs.

This is it! We are done! We can download and flash a golden disk image over the network, and pivot into it within 20 seconds!

You can see the results here (click the image to watch the asciicast):